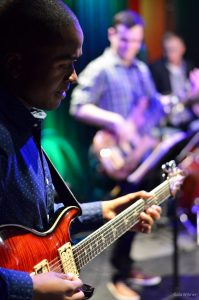 It’s not uncommon to meet a musician who plays more than one instrument; what is rare, however, is finding a musician that can not only play multiple instruments but can teach every one of them just as well as he can play them. That’s why Scottsdale Music Academy is especially thrilled to announce the newest member of our team: Cecil Alexander, a multi-instrument musician with years of professional experience both playing and teaching…qualities which make for an unbeatable music teacher!

While Cecil is new to SMA, he’s certainly not new to music. Cecil has been playing music in some form or another longer than most people have been listening to their favorite bands or going to concerts. At just eight years old—when most kids are still struggling to play “Hot Cross Buns” on the recorder—Cecil began building his impressive musical background, starting by learning to play the guitar, then later the drums, bass, and piano.

Originally from a small town in Michigan, Cecil’s love of music eventually took him to Boston where he completed his Bachelor’s degree in Jazz Composition at Berklee College of Music. There he was able to explore an entirely new side of music, learning about various facets, such as music theory, musicianship, and ear training. During this formative time, Cecil also began composing his own music and perfecting his performance skills as a member of two live bands that performed in and around Boston. Through a combination of  academic courses, music lessons, and self-teaching, Cecil has been able to truly master his craft and become the talented musician and passionate music instructor he is today.

For Cecil, music has and always will be a key source of happiness and a way to creatively collaborate with others. As Scottsdale Music Academy’s newest music teacher, Cecil aims to pass onto his students that same love for music by ensuring that the interests of the students are taken into account in each and every music lesson he teaches.

Although Cecil has already accomplished so much as a musician—performing at the Bitter End and Rockwood Music Hall in New York City, the Berklee Performance Center in Boston and the NAMM music convention in Anaheim—he continues to push himself to even bigger musical heights. Currently, Cecil is working to record an album with his fiance, which will have a jazz-meets-indie-rock vibe, and plans to take up the saxophone in the near future.

If you’re looking for guitar lessons or keyboard lessons with a music teacher who’s been in your shoes and knows his stuff inside and out, look no further than Cecil Alexander, a wonderful new addition to SMA’s already stellar list of the most qualified and accomplished music teachers in Scottsdale!