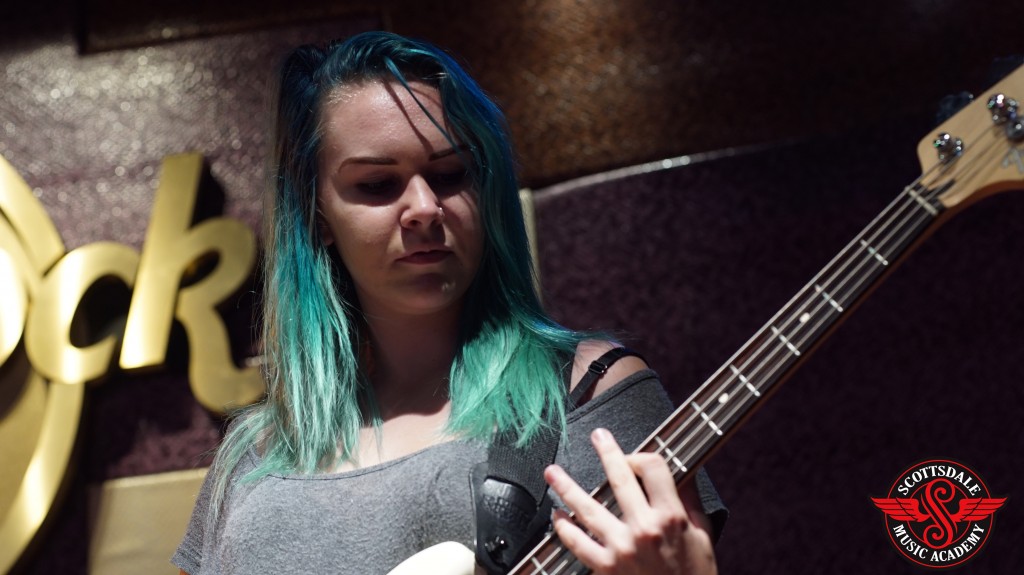 Meet Katie Gibbs, a 17-yr.old student at Scottsdale Music Academy. Katie is working with our music instructors on developing her skills on bass guitar and drums, while also occasionally taking guitar lessons in Scottsdale. She’s an energetic teen who’s been playing and performing with us for four years.

Katie initially started with Scottsdale Music Academy to develop her bass-playing and guitar skills. “I started to learn bass about a year before coming to SMA, but knew nothing more than how to play along to simple songs,” she says. “Since I’ve been with SMA, I’ve learned better techniques, how to improv, and understanding theory, which helps with writing and figuring out keys.”

Katie plays bass in several of the Scottsdale Music Academy-formed bands to get her more experience in playing live shows, yet she’s also keen to develop her own songwriting. She hopes that in the long run, she can have a band “make it somewhere in the music industry, but more importantly to make great music that means as much to a listener as it does to myself.”

She’s very happy the attention that she and the other students get at Scottsdale Music Academy.“At SMA, you get to know all of the instructors on a personal level, even if you don’t take specific lessons from them. So you do get to meet a lot of great musicians,” Katie says. “Because of that, I’ve also gotten a lot of great advice from all the instructors on how to move my music along personally such as how to deal with the business of it as well as writing within my own band.”

Katie credits her early interest in music to her brother and father, who both played guitar. Katie had played some piano, but soon started to pluck away at a guitar.

As for what artists and music she currently likes to play, Katie highlights her excitement about the energy of punk rock as a current favorite. “I play a lot of punk music because there’s a lot of energy behind the music!” she said with the exuberance of a typical 17 yr. old. Plus, she adds, because of the simple chord progressions in most punk rock, “there a lot of opportunities for me to make my own bass lines out of it and make it move a bit.”

She has also liked the rock band Fall Out Boy for many years, noting the band’s excellence in its songwriting, especially the lyrics and singing. “They (Fall Out Boy) use their wide vocal range to their advantage, and have it all work together and continue to come up with great material.”

If you want to experience learning and playing music firsthand like Katie Gibbs, contact Scottsdale Music Academy at 602-751-3537 or visit us on our website. Scottsdale Music Academy is the hottest music school in Scottsdale, AZ. At SMA, both youth and adult students build a solid foundation in technique and learn music they truly want to play. Your first music lesson is free! Learn to play the kind of music you want to play!

PrevPreviousTips For Buying A Guitar
NextSeeking a Career in Music?Next
Scroll to Top