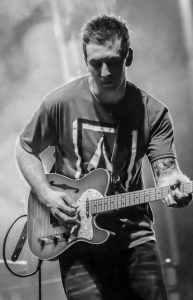 One of the key reasons we hear about students joining Scottsdale Music Academy is because of the deep talents and teaching dedication of our instructors. That’s true of all of our instructors, but in particular, our guitar instructor Chris Bandusky. Chris is an active guitarist who plays live in a country music cover band, a church worship band and other groups. Let’s find out more about Chris Bandusky!

Chris has a very deep musical background. He’s earned a double major from Arizona State University with degrees in business and music. During his time at ASU, Chris was the touring guitarist with Phoenix rap-rock act Trik Turner in the early 00s. Being on tour with a national act gave Chris insights into the music industry, and helped him become a better guitarist.

Chris brings a good attitude to all his musical activities. That counts for teaching students as well as getting along with other musicians.

Current Musical ProjectsCurrently, Chris plays guitar in the Trey Odum band, a country and rock covers band that plays often in Cave Creek, AZ on weekends, as well as Hillbilly Deluxe, another oft-gigging country-influenced band here in the Phoenix metro.

He’s also very active in his church worship group, playing lead guitar for the Gilbert, AZ-based church Sun Valley. Chris tries to blend the physical with the spiritual to bring out the best in him as a guitar player. It’s this same devotion to learning and teaching that he brings to the students taking guitar lessons in Scottsdale.

Have a listen below to a gorgeous guitar piece that Chris did in late 2015.

If you are interested in becoming a guitar student under Chris Bandusky’s teaching, contact us at 602-751-3537. Your first lesson is free!