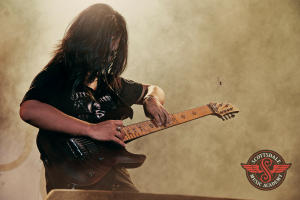 Everything is more fun with a little speed, especially the guitar! But playing an instrument fast isn’t as easy as pressing on the gas pedal when your cruising down an empty road in Phoenix. In order to develop your speed as a guitar player, you’ll need to practice. While guitar lessons and band rehearsals are greats ways to develop your skills, they won’t necessarily help you play fast. To really play like a speed demon, you’ll need to make a conscious effort to work on it and incorporate new elements into your guitar regimen.

Building speed doesn’t have to be complicated. A 1-2-3-4 exercise using a metronome is a simple way to gradually build speed. This exercise involves playing four notes per string using a metronome as your guide. Start at whatever beat you are comfortable with, then slowly increase the speed little by little. Move to the next highest speed only when you are able to play the notes accurately and feel ready to tackle picking at a faster speed.

If you really want to pick up the pace and strum faster, alternate picking is the way to go. It’s the #1 go-to method for guitars to add more speed to their playing because it’s one of the easiest picking methods to master. Like the name suggests, alternate picking is when you alternate downward and upwards strokes in an ongoing manner.  So, you pick one note with a downstroke then the next with an upstroke. This prevents arm fatigue and is easy to employ at fast speeds.

Believe it or not, there are certain pick angles than can either help or harm your guitar playing. For maximum speed and efficiency, you’ll want to angle your pick at 45 degrees towards the head of the guitar, so that it’s almost parallel to the strings. Angling it too far up or too far down will make one type of pick stroke easier to play than the other, which will cause you to use more picking motion than necessary. In other words, it’ll slow down your playing, and nobody wants that! For even better results, make sure you’re playing with just the tip of the pick (about 2mm) to ensure you don’t waste precious time moving the pick from one string to another.

When it comes to fast guitar playing, the size of your pick matters. A thick pick is better for shredding because thin picks are not equipped to handle rapid-fire playing. They often bend when played at faster speeds, which translates to more wasted time. Instead, the ideal pick size for speedy guitar playing is 1mm or more in thickness. A pick this size will be strong enough to endure any type of playing!

If you’re serious about ramping up your guitar playing, contact Scottsdale Music Academy for our private or group guitar lessons. We’ll teach you all the speed secrets we know, so you can show off your guitar skills all over Scottsdale, Phoenix and beyond!