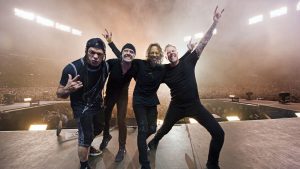 This past weekend, on August 4, 2017, the extremely popular heavy-metal band, Metallica, performed a sold-out show at the University of Phoenix Stadium in Glendale, Arizona. This was for their WorldWired tour. Avenge Sevenfold was the opening act. There were pros and cons of this show, and this was one of the first bands I’ve ever seen out of my comfort zone. Most likely, I would personally not attend another show similar to this one. However, the experience was one to remember.

In my life, I have only experienced a handful of concerts, mainly musicians in the indie rock genre. It was one of the biggest venues I had ever been to, and with the show completely sold out, the crowd was almost as entertaining as the actual performance.

The doors opened at six, but I arrived at 7:30. There wasn’t any rush to get there, as I would have been waiting for three hours before the main show started. In the meantime, I found my seat, which was at the further back end from the stage. Four large panels displaying live footage of the musicians were set behind the band as well. 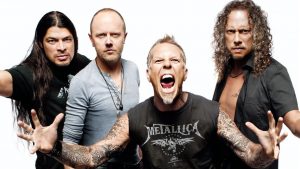 About an hour after Avenge Sevenfold played their last song, the lights once again dimmed and the opening clip of the 1966 film The Good, The Bad, and The Ugly came on the large panels. It was interesting to have a part of a movie as the introduction to a band; I had never seen something like that before. Metallica started the show off with the song “Hardwired”.

If you ever were to attend a concert similar to Metallica’s, I would advise bringing ear plugs. The sound was so powerful that it physically shook me. The guitarists worked extremely well together, their technical skills were astonishing.

After the first song, lead singer James Hetfield said a few kind words. “We don’t care who you voted for. We don’t care who you want to marry. We’re here celebrating life together. We are here for our similarities, not differences.”  The rest of the show was loud and intense. There were fire displays so bright, the heat reached my seat far from the source.

Seeing a show so like this one is one to remember. Even if the music isn’t your style, it is interesting to experience.