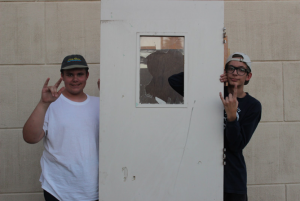 Last Monday, on August 7, 2017, I went to my first ever show at the now non-profit venue, The Trunk Space to see the Harrison Huffman Band. Now located inside Grace Lutheran Church, The Trunk Space is a very unique venue to see a show in, and I would highly recommend it to anyone in the area. Playing in the same show as I sat with the two members of the band Harrison Huffman, and Max Rogers and asked them some questions.

Harrison Huffman: It had no creativity at all. It didn’t have any thought to it, you know Jimi Hendrix, his band, it’s just a basic band name.

What makes your sound unique?

Harrison: It’s not really that unique.

Max Rogers: Well what makes our sound unique is that we created our own genre of music.

What would describe your genre as?

Harrison: Yeah, that’s exactly what it is.

Who are people that inspire you? Like artists and musicians.

Max: Jimi Hendrix. All Along the Watchtower is my favorite song by him.

Harrison: I like Black Sabbath, and The Grateful Dead.

Any upcoming Eps, albums or singles?

Harrison: Yes, my friend Collin, he recorded a new album for me, it sounds sick.

What’s the name of it?

Harrison: I don’t know yet.

How long have you been playing?

Harrison: Since I was like, ten-years-old. My dad’s a musician, so I kinda wanted to start doing stuff after seeing him.

What are your plans for the future?

Harrison: I don’t know, my dream is to not be broke.

Max: I really want to be a professional musician.

Any Interests outside of music?

What can you tell me about your instrument?

Max: I can’t really describe it. Even though there are only seven pieces, you can play it differently, and create all these different genres with the same kind of drum. I think it’s really cool how different music can be just by playing the instrument differently.

The Harrison Huffman Band is playing a release show for a new album on September 14, 2017 at The Trunk Space.