It’s nearly time for that big musical event of the year when musicians of all kinds are recognized by their peers and fans. 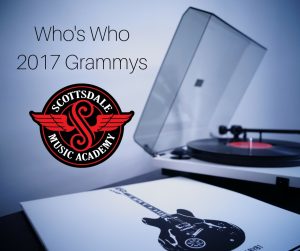 That’s right, we’re talking about the 2017 Grammy Awards, which will air live on February 12, a week after the Super Bowl, at 8pm EST on CBS. Among the performers scheduled to play live at the Grammys include Metallica, Keith Urban, Carrie Underwood, Adele, John Legend, Bruno Mars and others.

Many of our music-loving students at Scottsdale Music Academy aspire to be at the top of their musical game as they get older. There’s no better collection of artists to look up to than those nominated for last year’s recordings.

Adele is being nominated for her LP ‘25’ and will compete against other releases by Beyoncé (Lemonade), Drake (VIEWS) and Justin Bieber (Purpose), among others. Let’s have a look at some of these artists in action.

Here’s Adele singing “Million Years Ago” from her LP 25, which is up for five nominations.

Here’s Bruno Mars performing on New Year’s Eve 2016 in Las Vegas. No word on what song he’ll play at the Grammys. This will be Bruno Mars’ 5th performance at the Grammy Awards.

While both stars here are being nominated for their solo performances, the two often sing and record together. Here they are performing a cover of Tom Petty’s song “Stop Draggin’ My Heart Around” from the American Idol Final show of 2016.

Maybe you’re a budding musician who wants to get better at guitar, bass, piano or drums. We can help! Contact us at Scottsdale Music Academy! Our instructors will work with you in individual or group lessons to improve your talents on guitar, piano, bass or vocal lessons. Call us in Scottsdale, AZ on 602-751-3527 for a free lesson and intro tour. We’re Scottsdale’s leading music instruction academy in Scottsdale, between Scottsdale Road and Hayden Road.

PrevPreviousGet Creative!
NextPerforming for the World in a Dive BarNext
Scroll to Top